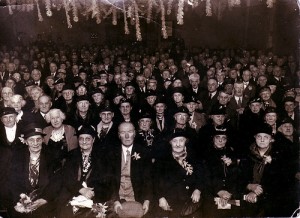 oh take your time, dear, we can wait

To put it bluntly, one of the most useful, yet least used techniques in public speaking is the pause. Yet not only are most people unaware of the concept, oftentimes  they’re even actively avoiding using a pause at all costs. Why?

Because there’s this idea floating around which says that if you’re not saying anything, it means you’re not sure what you’re supposed to say. And while this could indeed be true,  apparently not knowing exactly what to say in each and every moment is a catastrophe, a disgrace and will make you infertile.

Let me offer a different perspective: it is completely OK not to know what you’re going to say in each and every moment of your speech. Even when it is absolutely imperative that you memorize and reproduce an entire speech word for word (and mostly you won’t be doing that), you are still talking to a group of people. What this means is that while you can predict some of their reactions, you still won’t know how they’ll exactly behave (damn free will). So, since you’ll be adapting to their reactions, you’ll have to make numerous decisions mid-talk, such as which word to emphasize in the next sentence, how to slightly alter the explanation which will come up in 20 seconds or even how to redirect your entire talk to a different theme.

How can you do this thinking and decision making if you are constantly talking? Well, that’s just one of the benefits of making a pause:

– It gives you time to think about what you’re going to say. In fact, when you make a pause and look into the distance with a gentle frown, you are much more likely to seem as thoughtful rather than lost. So, again, there’s no need to worry that a pause will make you seem lost. This also doesn’t mean that you should be frowning for the sake of frowning, more on that later.

– It emphasizes whatever comes after it. A well delivered pause is like a vacuum which pulls in the crowd, making them more actively anticipate the second part of the sentence. The longer the pause, the stronger the payoff.

– It gives your listeners time to absorb whatever came before it. Your presentation may sound completely logical to you, but even when you use very simple words and examples, your audience is still continuously analyzing the talk while you’re delivering it, since they are hearing it for the first time. If you talk too fast, they simply won’t have time to connect the A, B and C – no matter how simple it may seem, they still need a second or two for each part to sink in.

These effects are only magnified when the pause is used well throughout the speech: it gives rhythm to your entire talk and makes your tone sound much more natural and effective. It also forces you to think more about what you’re saying in any given moment, which word should be emphasized etc.

So, how can you practice using the pause? Well, here’s a little secret – you’re already using it without being aware of it, whenever you use ummm, errrr and similar fillers. Fillers are, indeed, used when you’re not exactly sure what to say and you just need to say something. Of course, using fillers any more often than rarely does actually make you sound like you don’t really know what you’re talking about, even when you do. I’m sorry to say, but we’ve trained ourselves to use exactly the wrong sort of pause.

This in turn means that the first good exercise you can do is the following:

1) Any time you are practicing delivering a speech, try to build your awareness of the moments when you are using fillers.

2) The moment when you feel you’re about to use a filler, make a 3-4 second pause instead. Try not to make any sound, but still maintain contact with your imaginary audience.

By doing this, you are basically retraining yourself in using proper pauses. I also recommend recording yourself, not only for counting the number of times you’ve used fillers as opposed to pauses, but also for noticing how the “feel” of the entire speech changes between takes. (in case you have a problem with recording yourself, read this)

Next we’ll see how to take your pauses (and even fillers) to a whole new level.